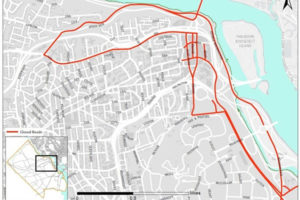 Tens of thousands of runners and spectators will descend on Arlington for the annual Marine Corps Marathon on Sunday.

The race, now in its 40th year, will have up to 30,000 participants running around Arlington and the District.

As a result of the race, Arlington County Police Department, Virginia State Police and the Pentagon Force Protection Agency will be closing down more than 20 roads for much of the day, including parts of Wilson Blvd, Washington Blvd and Lee Highway.

N. Kent Street in Rosslyn will be closed from Wilson Blvd to 19th Street N. from noon on Saturday, Oct. 24, until the end of the marathon on Sunday, for the marathon’s finish festival.

Route 110, between Washington Blvd and the Pentagon north parking lot, will be closed from 4 a.m. to 3:30 p.m. The highway will also be closed between I-66 and Jefferson Davis Highway from 4 a.m. to 4:30 p.m., as will Marshall Drive from N. Meade Street to Route 110. 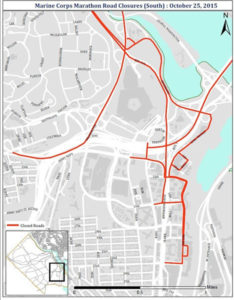 A number of closures in Crystal City are planned to accommodate the tail end of the marathon course and the Crystal City MCM Family Festival.

The following roads will be closed starting at 7:30 a.m.

Street parking will also be limited in parts of the county near the marathon course during the race. Participants and spectators are advised to either Metro in or — in Crystal City — park in a parking garage at Crystal Drive and 23rd Street S. before the road closes.