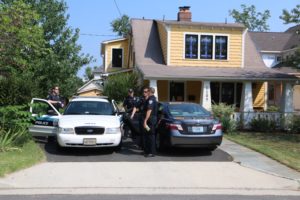 Last month police searched Black’s house — which was several blocks from his estranged wife’s home, where she was found dead — and removed bikes and other items as evidence. Speaking to television reporters at the time, neighbors said they were nervous to have Black still living in the community.

Bonnie Black was a psychologist who did contract work for the FBI. She was found stabbed to death after her young children were found wandering outside her home by a neighbor.

The Arlington County Police Department’s Homicide/Robbery Unit and Tactical Unit have taken David Black, 46, of Arlington, VA, into custody pursuant to an indictment issued by a special investigative grand jury.  These charges stem from the murder of his estranged wife, Bonnie Black which occurred on April 17, 2015 in the Aurora Highlands neighborhood of Arlington County.  The indictment and subsequent bench warrant charges him with one count of first degree murder and one count of burglary while armed with the intent to commit a felony.

A neighbor discovered the victim’s two young children wandering outside of the home in the early morning hours of April 17, 2015.  At 7:50 a.m., Arlington County Police responded to the 1100 block of 18th Street South where officers discovered the 42 year-old female victim deceased inside her residence.

A special investigative grand jury was convened by the Arlington County Circuit Court and heard evidence and testimony surrounding the murder of Bonnie Black.  Today that grand jury returned an indictment against David Black and he was arrested without incident.