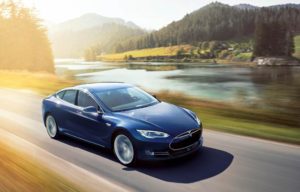 A county worker was sent to the hospital after a garbage truck collided with a Tesla on Tuesday morning.

The incident happened around 9 a.m., at the intersection of N. Madison Street and 9th Road N., in the Dominion Hills neighborhood.

Police say the garbage truck was turning right onto N. Madison Street, but was waiting for a pedestrian to cross the street. A driver in the high-end electric sports sedan apparently became impatient and attempted to go around the truck, according to Arlington County Police spokesman Dustin Sternbeck.

With the Tesla in the truck’s blindspot, the truck driver proceeded forward and ran into the car, Sternbeck said.

A county worker on the garbage truck was transported to the hospital for “precautionary reasons.” The woman driving the Tesla was determined to be at fault for improper passing but did not receive a traffic citation, according to Sternbeck.