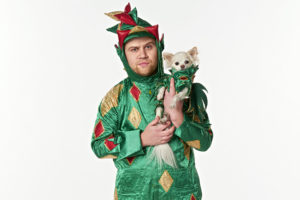 A man dressed as a green dragon will take the stage with a Chihuahua at Arlington Cinema & Drafthouse (2903 Columbia Pike) next month.

That man is Piff the Magic Dragon and the Chihuahua is Mr. Piffles, his trusty sidekick. Together, the duo’s oddball blend of comedy and stage magic propelled them to the finals in the latest season of “America’s Got Talent.”

Fresh off of a six-month stint at The Cosmopolitan in Las Vegas, Piff and Piffles will perform four shows in two nights on Friday, Jan. 1 and Saturday, Jan. 2, with performances at 7:00 and 10:00 p.m. each night. Tickets are $20.

Piff — who goes by the name John van der Put out of the costume — said he’s ready to show his audiences things they’ve likely never seen.

“Ever wanted to see a chihuahua escape from a straitjacket?” Piff said via e-mail. “Come to the show and cross that off the bucket list.”

Piff added that he’ll showcase some new tricks during his Arlington show, such as teaching his dog, Mr. Piffles, “how to punch a shark in the nose” and something from “the golden age of magic dragons.”