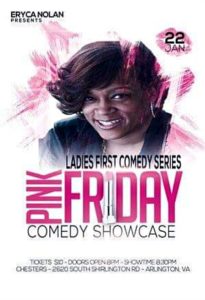 The showcase is advertised as a “Ladies First” comedy series at the restaurant and pool hall, which opened this fall in the former home of Lucy’s ARL, another pool hall that closed in 2013.

As the name suggests, the show is produced by women and will feature up-and-coming female comics in the greater metro area.

Tickets are available online for $10 (not including fees), but the first 25 people to reserve tickets will get them free.