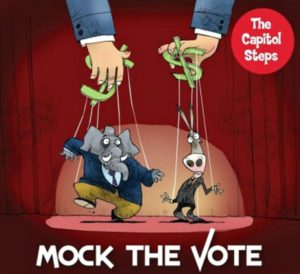 A D.C.-based comedy troupe known for “putting the mock in democracy” is coming to an Arlington high school this month to support local theater.

The Capitol Steps will perform at Yorktown High School on Sunday, Jan. 31 from 7-9 p.m. The ensemble was formed by a group of Senate Staffers and has been performing their comedy — which combines both musical and political elements — for more than 30 years.

The troupe will perform songs from their latest album entitled Mock the Vote at the show. Together, the performers in the group have worked in 18 Congressional offices and have a combined 62 years of experience in the Senate and House.

General admission tickets are $35 per person. There will also be a pre-show cafe from 6-6:50 p.m. that requires separate tickets for $10 apiece. Both are available for purchase online.

A portion of the proceeds from all ticket sales will support the Yorktown Theatre Arts Program.