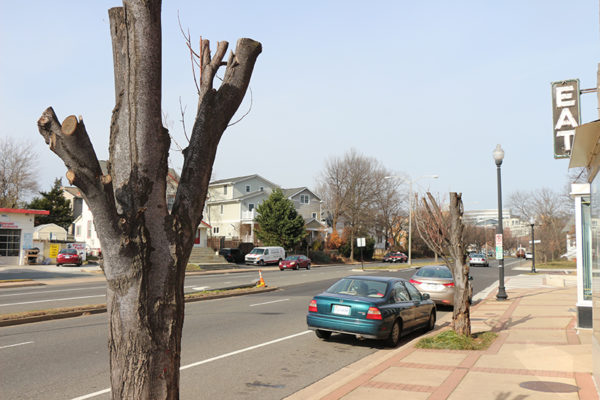 (Updated at 5:17 p.m.) Two mature trees along Washington Boulevard at Pershing Drive were given severe trims earlier this winter, leading at least one nearby resident to call the trimming “vandalism.”

The trees in the sidewalk in front of Texas Jack’s Barbecue, Second Ascent Consignments and State Farm Insurance — until recently, home of the longtime Corner Cupboard antique shop — were subject to the harmful pruning method called “topping.” The leaf-bearing crowns and the lower limbs have been removed, leaving behind what are essentially 10-foot tall stumps.

The International Society of Arboriculture says topping is “the most harmful pruning practice known.”

Arlington County Department of Parks and Recreation told ARLnow.com they did not trim the trees and have sent letters to nearby businesses as part of an investigation.

As the county didn’t perform or approve of the cutting, the reader, who prefers to remain anonymous, considers the non-permitted trimming unlawful and the act can be defined as vandalism.

“Vandalism is a crime, and these trees are city property — their destruction is just as illegal as tearing down county street signs or spray painting a county vehicle.”