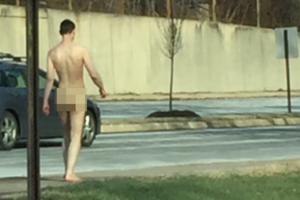 A man startled some locals when he was seen walking naked along a street near Pentagon Row yesterday afternoon.

Drivers spotted the man at the intersection of Army Navy Drive and Joyce Street around 1:30 p.m. yesterday, according to police. Authorities initially received a call for a “naked male walking in cold weather talking to himself,” said ACPD spokeswoman Ashley Savage.

Temperatures hovered close to freezing throughout the day yesterday.

An officer who arrived on the scene determined that the man was “in need of mental health treatment,” and the man was transported to Virginia Hospital Center for help.

Photo by an Arlington resident