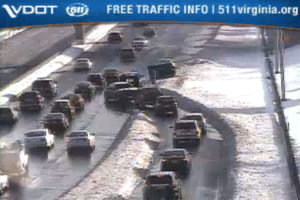 (Updated at 4:25 p.m.) Police and firefighters were on the scene of a crash involving an overturned vehicle on I-395 earlier today.

The crash occurred near exit 8B on the southbound lane of I-395 just before 3:30 p.m. this afternoon.

No injuries were reported and everyone was able to safely escape the car, a Toyota, according to scanner traffic.