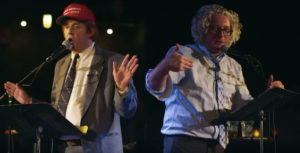 The show stars comedians Anthony Atamanuik as Trump and James Adomian as Sanders.

“It’s Republican Billionaire vs. Democratic Socialist fighting over the issues before the 2016 presidential election,” trumpets the Drafthouse website. Arlington is the second to last stop for the “unsanctioned debate” on a multi-city tour.