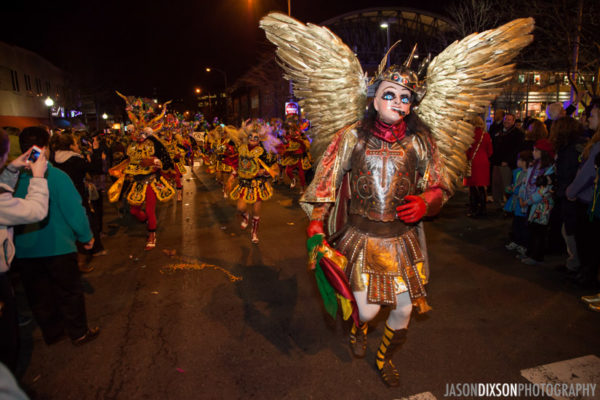 Masked characters, dogs in costumes, marching bands and other Mardi Gras partiers are set to make their way through Clarendon tonight.

After dodging the threat of snow following two years of weather delays and cancellations, the 17th Annual Clarendon-Courthouse Mardi Gras Parade is slated to kick off at 7 p.m. on Wilson Boulevard, making its way from N. Barton Street to N. Irving Street.

After the parade, revelers then can head to the first-ever Clarendon Mardi Gras Ball at the Clarendon Ballroom (3185 Wilson Blvd.) The party is scheduled to run from 7 to 11 p.m.

More than 30 groups are expected to march in the parade, which is organized by the Clarendon Alliance. The non-profit organization has billed the parade as a “family-friendly event” that is “big fun.”

“Participating in the parade is a great way to have fun — participants can wear masks, dress completely inappropriately, and throw stuff at people,” the Clarendon Alliance says on its website. “What’s not to like?”

Some roads will shut down starting at 4:30 p.m. due to the parade. According to the Arlington County Police Department, the street closures include:

Clarendon Ballroom will host the Yamomanem Jazz Band and the 8 Ohms Jazz Band and serve traditional Louisiana food, with wine, beer and punch, as part of the Clarendon Mardi Gras Ball.

Ball guests under the age of 21 are welcome to attend, but must have a parent or guardian with them. Tickets to the party cost $20 online and $25 at the door.

Iota Club (2832 Wilson Blvd), meanwhile, will be hosting its own Mardi Gras celebration starting at 8:00 p.m. The free event features a rock-blues band and $3 gumbo shots.