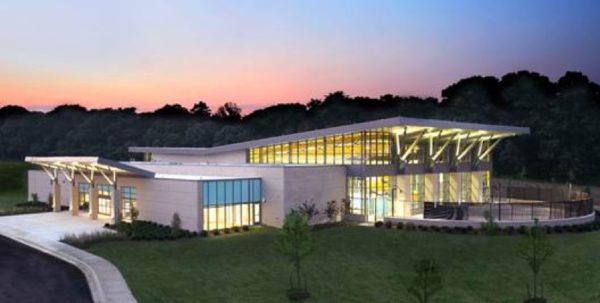 The following op-ed was written by Tobin Smith, Chair of the Long Bridge Park Citizen Advisory Committee. Smith is also a past chair of the Arlington Park and Recreation Commission.

Earlier this week, the Long Bridge Park Citizen Advisory Committee, which I chair, recommended that the County proceed with designing a new aquatics, health and fitness facility at Long Bridge Park.

This is not an attempt to revive the large aquatics center that was shelved by the County in 2014 after construction bids far exceeded the bond funds authorized by Arlington voters in 2004 and 2012. We have learned many lessons from that. The current proposal is one-third smaller and more modest. It should have a more sustainable design and less ambitious energy-saving systems. It should be bid and built with much stronger controls on costs. And perhaps most importantly, not a dime more should be spent for this project than what voters already approved. Additional features should only be added if they meet a clearly identified community need and if an outside sponsor/partner is willing to bear the costs.

The scaled-down facility would feature two pools: a 50-meter pool for lap swimming, fitness and competition and a multipurpose leisure/training pool for family fun and swim lessons/classes. It would also include ample space for exercise equipment and fitness activities, which generate revenue to offset costs. The facility our committee envisions is comparable to those enjoyed by residents of many neighboring jurisdictions, including the District and Fairfax, Montgomery, Prince Georges, Loudoun and Anne Arundel Counties.

Besides the aquatics and fitness facility, the project known as Phase 2 of Long Bridge Park includes 10 more acres of parkland for informal recreation and community gatherings; extension of the esplanade, rain gardens, public art, and parking. The authorized, available county funds for all this totals $64 million. Based on staff estimates, the hard costs for construction of the facility we are recommending should be about $44 million of that.

Our committee’s recommendations were based on extensive community engagement. Several hundred Arlingtonians provided input at the County Fair and other events. Over 1900 responded to an online survey. A statistically valid, countywide recreational needs survey found that aquatics resources ranked as the highest indoor recreational need for over 60 percent of Arlington households. Additional indoor fitness and exercise spaces also got substantial support.

Our committee also found that despite the recent improvements of Arlington’s three high school-based community pools, the Department of Parks and Recreation is not able to meet Arlington residents’ demand for county-sponsored aquatic programs such as learn to swim classes and senior water aerobics. County staff report that in the last two years, the number of aquatics class participants has grown 24%. Nearly 40% of those who tried to register for these classes have been waitlisted. Arlington’s expected population growth will make the wait lists even longer in the future. Moreover, because our existing pools are used for school instruction, they are unavailable for seniors and other community users during school hours.

The facility we recommend will be able to accommodate a wide variety of aquatics and fitness programs and activities for Arlingtonians of all ages and abilities. Such consolidated, community-run facilities have the added benefit of achieving economies of scale that maximize cost recovery, compared to the performance of much smaller neighborhood or school-based pools.

Some will say that Arlington should not build a new recreational facility right now because other county needs are more pressing. They will say that the recreational needs so clearly identified can wait, or are “wants” rather than “needs.” I disagree. As our population rapidly expands, we have a responsibility to provide ample opportunities within Arlington where our kids can learn to swim, where our county-sponsored swim team and Arlington-based water sports teams don’t have to travel elsewhere to practice and compete, where seniors can get vital exercise, and where families can exercise, recreate and play together when kids are not in school. We need to catch up with our neighbors and provide ample recreational and fitness opportunities for all parts of our population if we are to maintain Arlington as an attractive community in which to live.