A man robbed the Wells Fargo Bank at the corner of N. Quaker Street and Fern Street, just across from Arlington’s Fairlington neighborhood, this morning.

The man passed a note to a teller shortly before noon, Alexandria Police said in a press release (below). He was wearing a gray coat, dark pants and a “Brooklyn Nets” hat.

Other bank customers can be seen lined up behind the man in one of the surveillance photos released by police.

The Alexandria Police Department is investigating the robbery of a Wells Fargo Bank located at 1711 Fern Street. On Thursday, April 28, at 11:40 a.m., a man entered the bank and passed the teller a note. He demanded money, the teller complied and the suspect fled with an undisclosed amount of cash. There were no injuries.

The suspect is described as a male with a medium complexion, approximately 5’6″ tall with a thin build. He was wearing a baseball cap, glasses and a gray coat. Investigators believe this is the same suspect from the bank robbery on April 18, 2016.

The Federal Bureau of Investigations is offering a reward of up to $5,000 for information that leads to the identification, arrest and conviction of this bank robbery.

Police ask that anyone with information about this incident call Detective Christine Deibes at 703.746.6819. 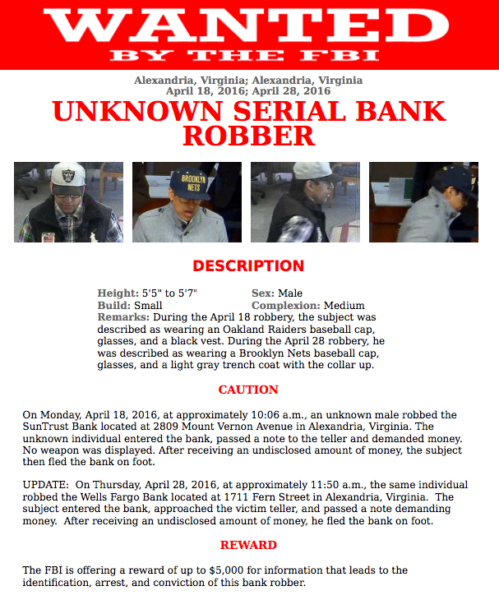