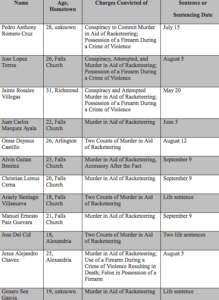 Prosecutors say all 12 were members of the notorious MS-13 street gang, which has a presence in Northern Virginia.

Six members of the street gang La Mara Salvatrucha, or MS-13, were convicted today by a federal jury for their roles in three murders and one attempted murder in Northern Virginia, among other charges.

“These violent gang members brutally murdered three men and attempted to murder a fourth,” said Dana J. Boente, U.S. Attorney for the Eastern District of Virginia. “Extreme violence is the hallmark of MS-13, and these horrific crimes represent exactly what the gang stands for. This was a highly complicated, death penalty eligible case with 13 defendants and more than two dozen defense attorneys. To say I am proud of our trial team and investigative partners is an understatement. I want to thank them for their terrific work on this case and for bringing these criminals to justice.”

“The defendants terrorized our local communities with senseless, depraved acts of threats, intimidation and violence,” said Paul M. Abbate, Assistant Director in Charge of the FBI’s Washington Field Office. “They murdered in the name of MS-13, but as this jury’s verdict makes clear, no gang can protect them from facing justice for their crimes. This verdict sends a clear message that the FBI will hold violent gangs and murderers fully accountable for their actions.  I would like to thank the agents, analysts and prosecutors for their tireless efforts to eradicate gang violence in our communities.”

A total of 13 defendants were charged in this case. Of those, six defendants went to trial and were convicted of all charges. Six defendants pleaded guilty prior to trial, and one defendant was severed from the case and will have a separate trial at a later date. Please see the table at the end of this press release for additional information on each defendant.

According to court records and evidence presented at trial, on Oct. 1, 2013, Jose Lopez Torres, Jaime Rosales Villegas and others drove to Gar-Field High School in Woodbridge to murder a fellow gang member.  However, one of the gang members in the car had not only alerted police to the murder plot, he also made recorded phone calls and wore a body wire to a meeting where the gang members, including Pedro Anthony Romero Cruz, who participated from prison on a contraband cell phone, planned the murder. The gang members’ vehicle was under surveillance that night, the victim had been warned to not be at school, and the informant was wearing a body wire.

According to court records and evidence presented at trial, on Oct. 7, 2013, Torres, Omar DeJesus Castillo, Juan Carlos Marquez Ayala, Araely Santiago Villanueva, Jose Del Cid, and three others murdered fellow gang member Nelson Omar Quintanilla Trujillo. The gang believed Trujillo was a snitch, and so the gang members lured him to Holmes Run Park in Falls Church, and brutally killed him by stabbing him with knives and slashing him with a machete. When they were done they buried Trujillo in a shallow grave.  Several gang members returned a short time later and, with the assistance of Alvin Gaitan Benitez, reburied the body of Trujillo.

According to court records and evidence presented at trial, on March 29, 2014, Castillo, Benitez, Christian Lemus Cerna, Manuel Ernesto Paiz Guevara, Villanueva, Del Cid, and one other murdered Gerson Adoni Martinez Aguilar, a gang recruit, for breaking gang rules.  Like Trujillo, the gang members lured him to Holmes Run Park and killed him. They stabbed him repeatedly, cut off his head, and then buried him in a shallow grave.

According to court records and evidence presented at trial, on June 19, 2014, Jesus Alejandro Chavez, Del Cid, and Genaro Sen Garcia murdered Julio Urrutia. Several gang members including Chavez, who had been released from prison eight days earlier, were out looking for rival gang members when they approached a group of young men, flashed their gang signs, and challenged them about their gang affiliation. During the exchange Chavez pulled out a gun and shot Urrutia in the neck at point blank range.