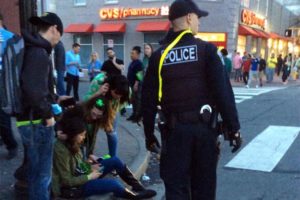 An influx of fake IDs from overseas has prompted a crackdown by the Arlington County Police Department.

ACPD says it recently started “a high-visibility underage drinking enforcement and education campaign designed to curb the use of fake IDs by underage individuals.” The campaign is targeting the busy Clarendon bar district on weekends.

“Over the last month or so, a number of fake IDs — originating from overseas online shops — have been turned into police by Clarendon businesses,” explained ACPD spokeswoman Ashley Savage. “This initiative was developed to address this issue.”

“This is a newer initiative but it’s been going on for about a month,” Savage continued. “We have a great working relationship with the business owners in Clarendon and this is just one more step we can take to continue to make Clarendon a safe area at night. The initiative will be going on this weekend… [and] will be part of the regular duties of the officers working our Clarendon detail on Friday and Saturday nights.”

Savage said the campaign includes enforcement, signboards placed around Clarendon and social media outreach. (The department will be live tweeting from Clarendon on Friday night.)

“We encourage people to enjoy the nightlife Arlington has to offer but do so responsibly – and that includes waiting until you reach the legal drinking age of 21,” said Savage.

The full press release issued by ACPD this afternoon is below.

The Arlington County Police Department will conduct a high-visibility underage drinking enforcement and education campaign designed to curb the use of fake IDs by underage individuals. These efforts aim to deter those underage individuals from abusing alcohol and driving while impaired.

According to the National Highway Transportation Safety Administration, those under the legal drinking age are at a far greater risk of death in an alcohol-related crash than the overall population, despite the fact that they cannot legally purchase or publicly possess alcohol in any state. That’s why the Arlington County Police Department is reminding underage individuals to think before they drink; underage drinking comes with adult consequences.