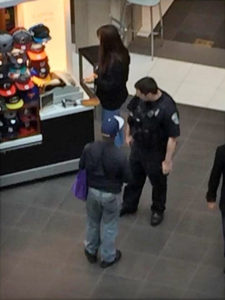 A woman who witnessed an act of kindness by an Arlington County Police officer has helped to share it via social media.

While visiting the Pentagon City mall on Saturday with her son, Beth Schweinefuss says that she saw a man walking around the food court and standing by himself with a plastic bag on his head.

“We were sitting on the third floor of the mall resting and doing some people watching,” Schweinefuss told ARLnow.com. “We both noticed the gentleman in the food court standing by himself and wearing a plastic bag on his head. His mannerisms suggested to me he was possible talking to himself and was just looking around and listening to something on a portable tape recorder. That caught our attention.”

Soon after, a couple of police officers went down to the food court to speak to the man and Schweinefuss noted that instead of kicking him out of the mall, they spent a few minutes talking to him, taking care to speak to him with respect.

“They were smiling and chatting and doing their best to make this gentleman feel valued,” she said.

Eventually, all but one of the officers left. The officer who stayed took the man to a hat kiosk, helping him to pick one out and paying for it with his own money.

“It was moving to us because clearly this gentleman was in from the rain and rather than just escorting him out of the mall, the officers obviously took that time to find out what was going on with him and to provide some relief,” she said. “They clearly didn’t HAVE to do this, but they saw a person in need and helped. It was an opportunity for us to talk about people in need and how to help, but also to talk about how we so often see the negative encounters people have with police and it was very uplifting to see a positive encounter.”

Arlington County Police Department spokeswoman Ashley Savage said Schweinefuss contacted the department via its Facebook page, to share the story. After doing some digging, Savage was able to confirm that the officer had not only bought the man a hat, but had bought him dinner as well.

“We take protecting and serving beyond just our enforcement of the law. We like citizens to help each other and so the fact that we were able to do that and this woman and her son were able to see it and share a little bit of a life lesson — that’s more than we could really ask for in these types of situations,” said Savage.