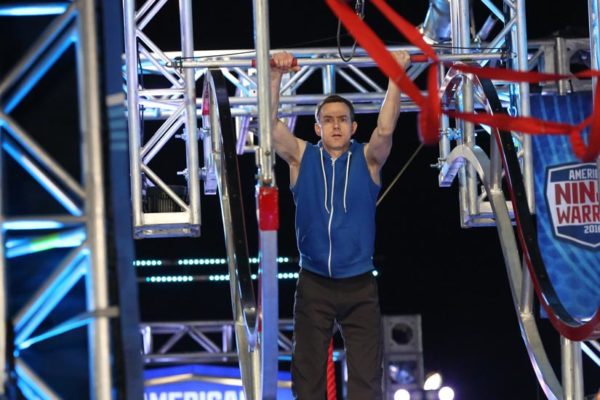 Arlington resident Mike Chick is a 39-year-old husband and father of two and one of the area’s top defense attorneys. He’s also an American Ninja Warrior.

Chick had been a fan of the NBC show for years and, to the loving skepticism of his wife, he would claim that some day he was going to try out for and compete on the show.

It wasn’t until a near-death experience that Chick ended up trying out for the show. Chick was visiting a client in jail when his heart stopped beating for 30 seconds. After being evaluated by doctors, it was discovered that he has a medical condition that causes his heart to stop whenever he passes out. He says that made him realize life was short.

Along with the health scare, Chick received inspiration from an unlikely source: “I was definitely in the worst shape of my life at the time that I started training for this and I remember right before I started to do it, I saw a meme on Facebook that said something like: ‘A year from now, you’ll wish you had started today,'” he said. “As silly as it sounds, its something else that told me that it’s time.”

Out of the 70,000-80,000 applicants who applied for the show, only 100 are invited to each regional qualifier. After months of grueling training, Chick was invited to attend the qualifier in Atlanta.

“I think that the most important thing that I see with these competitions is having adaptability and good body awareness,” he said of his training. “I think that makes a difference between the people who do consistently well and those who don’t. Adaptability and being able to change on the fly or being able to adjust to a situation that you might not have preferred to find yourself in is a big part of it.”

Chick also credits his five-year-old son as an inspiration. At his young age, he is already competing in ninja competitions and practicing parkour and other athletic pursuits.

“I try to look at the world through the eyes of my five-year old son,” he said. “To him, everything is something to play on, everything is an obstacle or a challenge. You look silly and ridiculous jumping over things outside of the federal courthouse. The U.S. Marshals are a little skeptical and may take their Tasers out but looking at the world this way is helpful.”

After the five qualifying rounds are shown, the top 15 contestants in each city make it to the finals in Las Vegas. Along with the first 75 finalists, 25 wild cards will be given out to other contestants, allowing for 100 contestants to try and win the $1 million prize.

Chick’s Atlanta qualifier will be shown tomorrow, June 8, at 8 p.m. on NBC, with an encore being shown at the same time the following day on the Esquire network. If he advances — Chick couldn’t reveal the outcome of the competition, which was taped several months ago — he will appear in subsequent episodes.