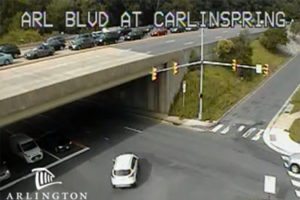 Update at 6:30 p.m. — Route 50 is closed in both directions again, according to WTOP and Fairfax County Police.

Update at 6 p.m. — Route 50 has reopened to traffic in both directions, WTOP reports.

Meanwhile, Metro commuters also had to deal with delays during this evening’s commute. A disabled train at the Courthouse station prompted single tracking and serious delays on the Orange and Silver lines.

Westbound Route 50 has been closed at N. Manchester Street, near Kenmore Middle School, due to a bank robbery investigation in Seven Corners.

The robbery was reported this afternoon at the TD Bank at 6198 Arlington Blvd. Initial reports suggest that the suspect told bank employees he had a bomb, then left a suspicious package in the bank before fleeing the scene.

Route 50 is closed near the bank, as Fairfax County police and the bomb squad investigate. Arlington County Police have closed westbound Route 50 at N. Manchester Street, not far from the county line, and as of 5:15 p.m. had also shut down access to westbound Route 50 from Glebe Road.