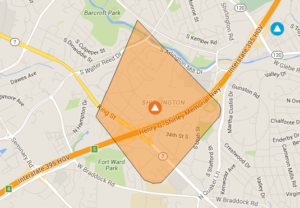 Update at 11:15 a.m. — Power has been restored to all but 77 Dominion customers in Arlington.

The Virginia Dept. of Motor Vehicles office on Four Mile Run Drive is reported to be among those affected by a widespread power outage this morning.

On what may be the hottest day of the year so far, large portions of the Shirlington and Fairlington areas are without power.

Via its Twitter account, Dominion says that the cause of the outage has not yet been determined, but crews are working to restore power by 2 p.m. A resident said she heard an “explosive sound” before the outage, suggesting a possible transformer failure.

Another Twitter user reports that customers have left the Four Mile DMV office after it lost power.

@jeanne_blue @ARLnowDOTcom See above. Our power in Fairlington is out

Power's been out at 4 Mile Run DMV for 20 min. No ETA on when it will be restored. Everyone is leaving now. @ARLnowDOTcom @DomVAPower