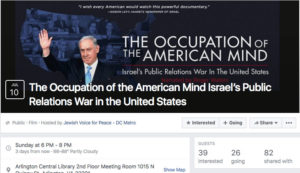 Expect dueling activism on the topic of the state of Israel at Arlington Central Library (1015 N. Quincy Street) this coming Sunday.

From 6-8 p.m., the group Jewish Voices for Peace, together with the Unitarian Universalist Church of Arlington Committee for Peace and Justice in Israel/Palestine, is showing the film “The Occupation of the American Mind: Israel’s Public Relations War in the United States.”

The viewing is taking place at the library’s second floor meeting room. (Outside groups often rent out rooms in the library, which does not imply a county endorsement.)

Opponents describe the film, which is narrated by rocker Roger Waters, as anti-Semitic, saying that attacking the legitimacy of Israel as a country lends credibility to terrorism. A protest is planned in response to the film screening.

“A group of concerned, pro-Israel advocates, led by Citizens Opposed to Propaganda Masquerading as Art (COPMA), plans to protest at the event, including distributing literature inside the room,” says the conservative activism website Truth Revolt.