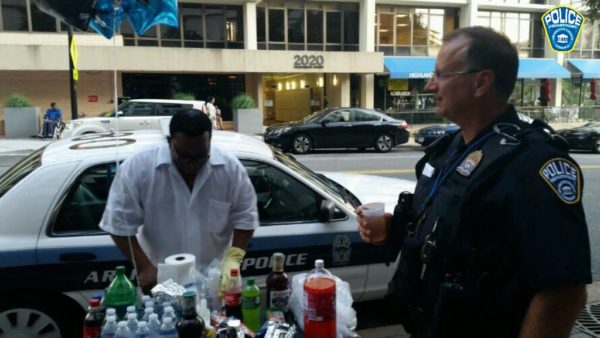 In the wake of last week’s shooting spree in Dallas that left five police officers dead, support for Arlington County’s police force has been pouring in.

ACPD, which prides itself on maintaining positive community relations, has been tweeting about some of the support it has been getting from locals (see below.)

Among the shows of support, according to a police spokeswoman:

“The Arlington County Police Department takes great pride in the relationship we have established with the community and is committed to building trust and confidence with those we serve,” said ACPD spokeswoman Ashley Savage. “We encourage citizens to attend community outreach events and explore the many ways we can work together to continue making Arlington County a great place to live, work and visit. On August 2, we will participate in National Night Out and on August 27 we will host a Summer Block Party at Kenmore Middle School.”

Thank you, Gerald Clark! He picked up the dinner tab for these Charlie Squad officers! We appreciate your generosity pic.twitter.com/FKZL5eKEl5

Meet Lawrence! He set up this stand outside ACPD with drinks & snacks for our officers. We have the best citizens! pic.twitter.com/CN3mW1lBkw

Thank you #ArlingtonVA! We truly appreciate the outpouring of support from our community. https://t.co/h93IWlaP19 pic.twitter.com/oNKkNDrcc7

Thank you #ArlingtonVA for the continued outpouring of support. Please know these messages mean a lot to us! pic.twitter.com/KBoa86Rtch

END_OF_DOCUMENT_TOKEN_TO_BE_REPLACED

More Stories
Morning Poll: Which Pokemon Go Team Are You On?County Board to Consider Purchase of Arts Truck