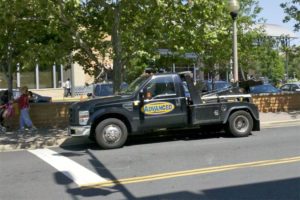 As of July 1, you may pay more if your car is towed in Arlington.

A new state law that overruled Arlington’s local ordinance kept the base tow rate at $135 but added up to two $25 fees for weekend, holiday and night tows.

The new trespass towing fees were among the topics addressed by the Arlington County Trespass Towing Advisory Board at its meeting in Courthouse last night.

Though towing companies are frequent subjects of consumer complaints, only two members of the public showed up to make their voices heard.

The first speaker was Florence Fee, who complained about alleged predatory towing practices. She described an occasion in which she was going to the doctor for a prescription and blood test and, due to a lack of available parking at the hospital, she parked at a parking lot for a small shopping center nearby.

“I was gone about 15-20 minutes, came back out to the parking lot, walked outside and had a very surreal moment because my car was completely gone and I had to stop for a minute and recall if I actually did drive into the parking lot,” she said. “There was a sign but it was maybe 1×2 feet, not a large sign. I walked into one of the small shops and the clerks there said to me they saw exactly what had happened. The towers were hiding behind bushes, they saw me coming in, watched where I walked to and when I walked to the Kaiser medical facility instead of the shops, they immediately towed my car. I want to stress I was gone 15-20 minutes and I was at a medical facility.” 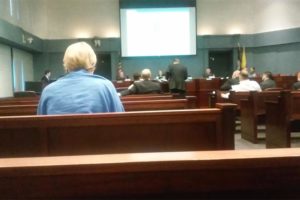 Also making an appearance was a man named Matt, who has published a website devoted to making a case against Advanced Towing, which he says damaged his Jeep during a tow. Matt said argued that the only complaints taken into account by the advisory board were the official ones sent into Arlington County, compared to the dozens of complaints on websites like Yelp, where Advanced Towing currently has a 1-star rating from 114 reviews.

The advisory board is currently seeking public comment on the county’s towing ordinance, through Aug. 15. Comments received will be considered at the board’s Sept. 15 meeting.