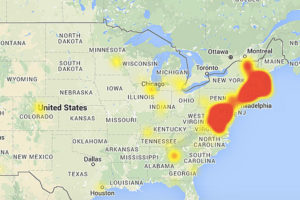 Update at 5:50 p.m. — Numerous users around Arlington are reporting that their service has been restored.

“We have identified the und​erlying cause and services are being restored,” said Jamie Debole, a Comcast representative, via email. “Customers’ services should now be working.”

Earlier: Comcast customers in Arlington, the D.C. area and much of the northeast U.S. are reporting issues with their cable TV service.

According to various social media posts, the problem is affecting those on Comcast’s X1 platform — its newest cable boxes. Some are also reporting sluggish internet service.

Various Twitter users, citing Comcast customer service reps, are saying that the problems were caused by a failed automatic upgrade to the cable boxes.

Come on @comcast!! Service has been out all day in Glen Carlin!! @ARLnowDOTcom

@ARLnowDOTcom it's been out all day. website says 6 pm for resolution. Had previously said 3 pm.

@ARLnowDOTcom out all day in Shirlington.

#ComcastOutage #ComcastRage. "Dane" from the Comcast Chat has given me a REAL update. The root cause of the outage is a FAILED X1 upgrade

.@comcast outage in most of northeast corridor. Not cool. pic.twitter.com/mZHbjKQb7S