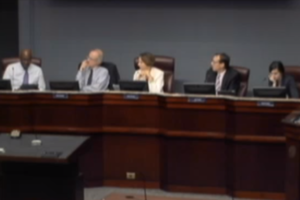 The County Board has given the go-ahead to a plan from the U.S. Department of Defense to install equipment around Arlington that could detect explosions and provide forensic data to investigators after an attack.

The board’s members voted unanimously last night to approve a license agreement between the County Board and the Defense Threat Reduction Agency (DTRA) to install the equipment on county property.

According to a county staff report, the nature and location of the equipment will be kept secret and exempt from Virginia’s Freedom of Information Act, a fact that worried ACLU of Virginia’s executive director, Claire Guthrie Gastañaga. Speaking before the board, Gastañaga argued that it was “important that the capabilities of the equipment be public.”

“We don’t think think that… those capabilities of this kind of equipment are any real secret,” she said. Additionally, Gastañaga urged the board to ask the Defense Department to agree not to install listening devices or other active monitoring equipment.

County Attorney Stephen MacIsaac replied that the board has some of the same concerns as the ACLU, and added that its members have had an opportunity to examine the plans to assure “that the nature of the equipment is not the kind of thing that can record audio or visual activities.”

“It is dormant equipment that is only activated when an event occurs and it does not record audio or video,” MacIsaac said. “You can have a high level of confidence that the equipment they’re putting out there is not capable of doing the sorts of things that there is concern about.”

Board member John Vihstadt agreed with McIsaac and said that “the county has a high degree of control over exactly what DTRA is doing and what they’re putting out on county property.”

“I think a big distinction here is that we’re not turning over any part of our county’s infrastructure or geography or territory to DTRA, we’re simply entering into a licensing agreement to deploy the kind of sensors that they have described,” added board member Christian Dorsey. “That gives me great comfort that many of the civil liberties issues that Ms. Gastanaga have brought up are not going to be ongoing issues here.”

Furthermore, board chair Libby Garvey said the county could choose to cancel the agreement if it ever became concerned with the new equipment.

Screenshot via County Board video