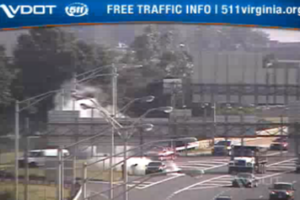 Arlington County police and firefighters rushed to aid a car that caught fire on southbound I-395 earlier this morning.

The fire began near the Boundary Channel Drive exit on southbound I-395 just after 8:30 a.m. White smoke could be seen pouring from a black Nissan for a period of about ten minutes this morning.

Arlington County firefighters extinguished the blaze shortly after arriving on the scene. No injuries were reported in the incident, according to scanner traffic.