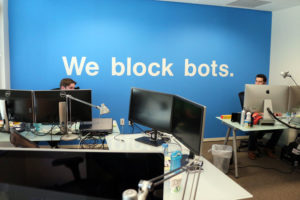 An tech company with offices in Arlington has raised more than $21 million in its latest round of financing.

Distil Networks, a startup that wages war on online bots, announced the sum of its Series C fundraising period earlier today. The company said it has raised $65 million to date.

The firm will use the money to “bolster global marketing and sales efforts, strengthen core offerings, and double the current workforce over the next 12-18 months,” according to a press release.

Distil Networks, Inc., the global leader in bot detection and mitigation, today announced that it has closed $21 million in Series C financing. The funding included participation from Silicon Valley Bank and existing venture investors Bessemer Venture Partners, Foundry Group, and TechStars. The new round brings Distil’s total funding to $65 million to date. The company plans to use the investment to bolster global marketing and sales efforts, strengthen core offerings, and double the current workforce over the next 12-18 months.

Bad bots are used by competitors, hackers and fraudsters and are the key culprits behind web scraping, account takeovers, competitive data mining, online fraud, and downtime. Distil’s 2016 Bad Bot Landscape Report confirms that bots are gaining sophistication, finding that 88 percent of all bad bot traffic has one or more characteristics of an Advanced Persistent Bot (APB).

“As bots learn to better mimic human behavior and become harder to detect, solutions must innovate rapidly to thwart attacks,” said Rami Essaid, CEO and co-founder of Distil Networks. “Our investors understand the enormous challenge that web properties face when it comes to defending proprietary information while maintaining a positive user experience, and they have chosen to support Distil in our pursuit to create a safer web. With this round of funding, we are looking forward to building upon our momentum and continuing to lead the market with our advanced protection against bot activity.”

Since closing Series B financing in June of 2015, Distil has hit several key milestones, including:

Expanding global reach with office opening in London and growing total employee headcount to 140, with built out teams in managed services, support, and data science.

“Since I joined the board of Distil, I’ve been continually impressed by the company’s ability to develop new products, streamline deployment, and exceed sales objectives,” said David Cowan, partner at Bessemer Venture Partners. “Naturally, I was eager to double down.”

Advanced Persistent Bots (APBs) have several advanced capabilities such as mimicking human behavior, loading JavaScript and external resources, cookie support, browser automation, and spoofing IP addresses and user agents. Their persistency aspect comes from their process for evading detection. For example, an APB might use 1000 IP addresses to make one request each, instead of one IP address to make 1000 requests, rendering impotent IP-centric defenses. According to Gartner, “fraudsters are also spreading their attacks over thousands of IP addresses — many of which are purposefully chosen to originate in locations that appear legitimate (for example, in the same geographic area that a target victim lives in). They are also slowing down their scripted attacks to move at the pace of an average human.”