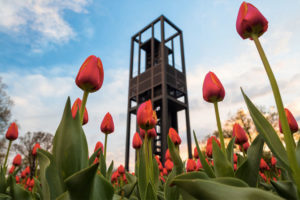 Fans of the Netherlands Carillon only have four more chances this year to see it in action with a carillonneur behind its keyboard.

The next free concert with the 50-bell musical instrument at 1400 N. Meade Street is scheduled for Saturday from 6 to 8 p.m., according to the National Park Service. Kipp Cortez, a Concord University music professor, is slated to perform.

The other remaining live performances are:

Visitors to the carillon can bring food to eat during the concerts. But picnickers should take their trash home with them.

Seating also is limited. Concertgoers are encouraged to bring blankets or folding chairs.

The concert series, which began in May, includes patriotic, jazz and pop music.

“People should come [to our summer concerts] for the view of the Washington, D.C., skyline and the chance to hear a variety of music played by the world’s leading carillonneurs,” Nassor, the Netherlands Carillon’s director, said in an interview with the Rosslyn Business Improvement District.