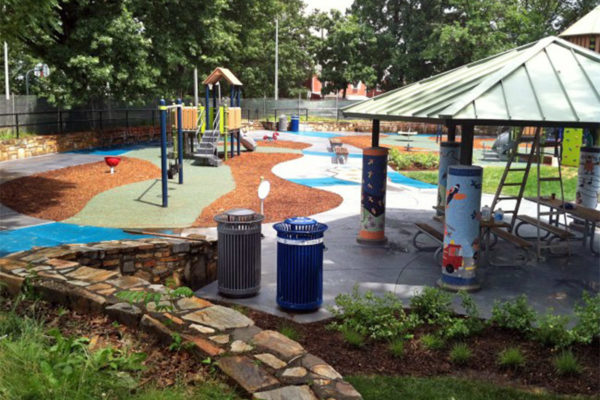 Someone has been repeatedly pooping on the Ft. Barnard Park playground, off of S. Walter Reed Drive, and it’s prompting police to step up patrols of the park.

A local resident wrote a letter to ARLnow.com this morning expressing disgust at the improper public potty practice.

Since my neighbors and I are having no luck through Arlington Parks and Rec, I am hoping you might take interest in this story and help get the word out so we can get more attention to it. I live on S. Pollard Street, and for the fourth time in less than a year and second time in less than 2 weeks, someone has defecated on the playground at Ft. Barnard Park at the corner of S. Pollard and Walter Reed Drive. They poop around the play equipment, not off to the side or in the bushes, and cover the feces with a shirt so that some unsuspecting child or parent can pick it up and get a fecal surprise. Parks & Rec comes to scoop it up and leaves smears; this morning it was tracked all over the playground by what I can only assume is a small child. Obviously we need some kind of patrol or enforcement or at the least, awareness of this disgusting person and the health hazard he or she is inflicting on our playground.

I will also throw in there that there was a stabbing at the other end of our block on the corner of S. Pollard and 22nd St. S. a couple months ago and someone was almost killed, so we obviously need better police presence.

Thank you for any attention you can bring to this ridiculously disgusting story.

“The Emergency Communication Center received a call today reporting defecation at Ft. Barnard Park,” Savage said. “This is the first call for service we’ve received regarding this issue at that location. The District Team in the area has been notified and extra checks will be conducted.”

Savage said the stabbing, which is unrelated to the pooping, resulted in non-life-threatening injuries to the victim. The incident happened in April and started as two people who knew each other having an argument about the Washington Redskins.

MALICIOUS WOUNDING, 160427038, 2200 block of S. Pollard Street. At approximately 7:25 p.m. on April 27, police were dispatched to Virginia Hospital Center for the report of a male victim suffering non-life threatening injuries as a result of a stabbing. The investigation revealed that following a verbal altercation between known subjects, the male victim was stabbed several times in the arms and abdomen. Warrants were obtained for malicious wounding for Larry Clinton Tootle Jr, 50, of Arlington Va.

This afternoon, the resident who wrote the original letter to ARLnow.com let us know that the latest poop had been picked up.

“I want to let you know that we spoke to parks and Rec again today and they sent someone over to clean up the most recent pile,” the resident wrote. “I also emailed the director of Parks and Rec today but she is out of the office. Our problem isn’t with the poor people who have to clean this up — it’s the fact that nothing so far is being done to stop it and the clean up is inadequate and does not sanitize the playground.”

Arlington Dept. of Parks and Recreation spokeswoman Susan Kalish said the department “is aware of the issue.”

“We are working to find a solution to the problem,” Kalish said via email. “We regularly inspect the park and clean up as needed. If it is placed on natural surfaces, such as grass or mulch we just pick it up. If it is placed on hard surfaces we pick it up as well as use a disinfectant in the area. Staff was not aware of additional issues after its recent clean up… [they are] going to the [park] to see what additional clean up is needed.”

This isn’t the first time an Arlington park had a pooping problem. In August 2014 we reported that local parents were peeved about toddlers peeing and pooping in Penrose Park.