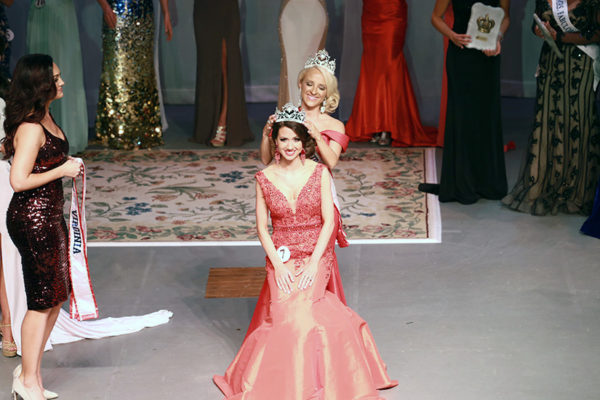 Elizabeth Peace — also known as Mrs. Arlington and Mrs. Virginia — wants to become Mrs. America, but she doesn’t care much about the recognition that comes with the title.

Instead, she wants to help make the world a better place by using the pageant as a platform to educate people about preventing child sex abuse.

Peace, who lives in South Arlington, will spend this week in Las Vegas rehearsing, donning evening gowns and answering judges’ questions, all in an effort to win the Mrs. America crown.

A native of Idaho Falls, Idaho, Peace moved to Arlington in 2014 after her husband was sent to Japan on a military assignment. Though still somewhat new to the area, she won the title of Mrs. Arlington earlier this year. Months later, she was crowned Mrs. Virginia.

Peace said that getting into the world of pageantry was a little daunting at first, and not even her idea.

After all, Peace is pretty busy. She spends her days working as a communications director on Capitol Hill. On the side, she’s a facilitator with child sex abuse prevention organization Darkness to Light.

“That was something that I went through the majority of my childhood and that is why it matters so much to me,” Peace said. “The biggest thing for me is letting people know that… it doesn’t have to ruin the rest of your life.”

Once she realized she could use the opportunity to promote the things she feels strongly about, Peace said she was all in.

“I think most people would wonder… why in the world would you do a pageant?” she said. “When I realized what you can do with that title and how many people you can talk to, to me, it was worth it.”

And wearing evening gowns and walking in high heels can be fun, too, Peace said.

Could she beat out 51 other women to become Mrs. America? Peace said she feels like the odds just might be in her favor as they were when she won her previous titles.

“I feel like my chances are good,” she said. “If I don’t win, I still feel like I am going to go in there being 100 percent myself.”

Locals who want to watch this year’s Mrs. America competition can tune in on the pageant’s website this Sunday Aug. 28, at 8 p.m.