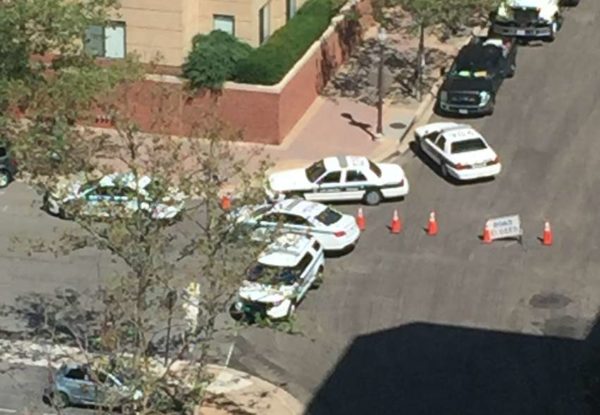 (Updated at 4:15 p.m.) A reported standoff with an armed man near the Virginia Square Metro station ended peacefully this afternoon.

The standoff was said to be taking place in an apartment tower on the 900 block of N. Pollard Street. Police said the man was making threats and was in possession of multiple loaded firearms.

A police spokeswoman described it as a “fluid situation,” with officers “taking an abundance of caution for everyone’s safety.”

While police took defensive positions down the hall from the man’s apartment, he was spotted outside the Starbucks near the Metro station. As it turns out, the man had left his apartment prior to police arriving. Officers talked with the man, who was said to be calm and mostly cooperative.

At 4 p.m., police said the situation was “safely resolved” and the man was “being referred to County services.”

During the standoff Pollard Street was closed to traffic and police advised people to avoid the area. One nearby resident told us that heavily-armed officers had the apartment building “locked down.”

END_OF_DOCUMENT_TOKEN_TO_BE_REPLACED

More Stories
Deal of the Day: Celebrate the 10th Annual Sip & Salsa for Only $10Rental Trends: How to Evaluate Real Estate Investment Opportunities