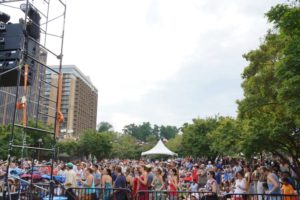 The festival will kick off at 1 p.m. on Saturday, September 10 at Gateway Park. Thousands of people are expected to attend the event, according to the Rosslyn BID, which helps organize the festival.

Grupo Fantasma, a Latin funk ensemble from Austin, Texas, is this year’s headlining act. The band’s 2010 album, “El Existentia,” won a Grammy for Best Latin Rock or Alternative Album in 2011.

Other acts scheduled to perform in the festival include vocalist Akua Allrich, guitarist Vieux Farka Touré and the Glen David Andrews Band.

“The Rosslyn Jazz Festival has something for everyone in the community,” said Mary-Claire Burick, president of the Rosslyn BID. “The festival takes a very modern and accessible approach to jazz with musical groups that have a strong millennial following.”

Along with musical performances, this year’s festival will feature a special where kids can create their own musical instruments and an “art jam” session where attendees can draw, paint or write poems inspired by the festival.

The event will also have beer and wine from local bars and a variety of snacks from area food trucks.

The Arlington County Police Department says it will shut down some roads in the area, from 10 a.m. to 8 p.m., for the jazz festival. Those road closures include:

“Heavy pedestrian traffic is anticipated between the hours of 2:00 p.m. and 10:00 p.m.,” the police department said. “Be prepared for delays if you do not detour prior to Fort Myer Drive.”