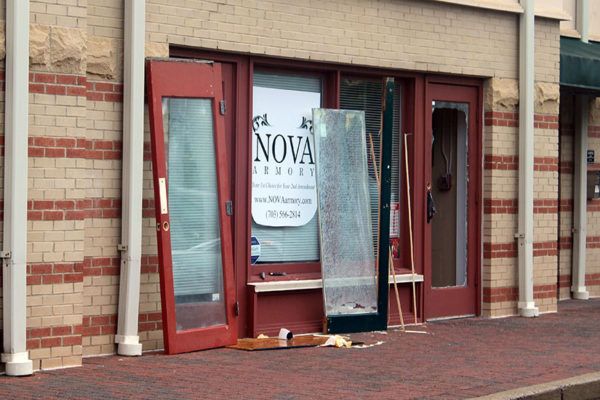 (Updated at 10:40 a.m.) There was a break-in this morning at Nova Armory, the recently-opened gun store in Lyon Park, but no guns were taken, according to police.

Officers were dispatched to the scene just after 5 a.m. for an activated burglar alarm.

“Arriving officers located a broken door to the business and secured the scene,” according to an Arlington County Police Department crime report. “The suspects had fled prior to police arrival.”

Some items were stolen during the burglary, police said.

“Empty firearm cases were taken but there were no weapons inside,” said ACPD spokeswoman Ashley Savage.

Police remained on scene to investigate.

A photo of the store’s back entrance shows doors and windows smashed in. The entrance is currently being repaired, we’re told.