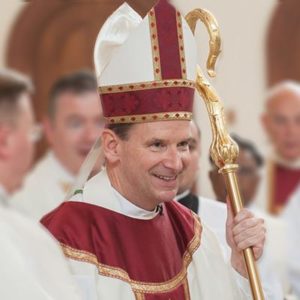 The incoming leader of the Catholic Diocese of Arlington today celebrated his first mass in the county since he arrived for the job.

Bishop Michael Burbidge had the mass at the Cathedral of Saint Thomas More (3901 N. Cathedral Lane) a day after news of his appointment by Pope Francis became public.

He officially is set to succeed Paul Loverde as Arlington’s bishop on Dec. 6.

A diocese representative live-tweeted Loverde’s homily at the mass:

"If we ought to remain faithful and strengthened, we ought to pray." @Bishop_Loverde #BishopBurbidge

"@BishopBurbidge wanted both of us here at Mass that we might affirm boldly our desire as bishops to affirm the truth." @Bishop_Loverde

"United with you, we bishops will walk humbly with our God as we encourage and teach with patience." @Bishop_Loverde #BishopBurbidge

Burbidge, a 59-year-old Philadelphia native, came to Arlington from Raleigh, N.C., where he led that city’s diocese since 2006. He previously was an auxiliary bishop at the Archdiocese of Philadelphia from 2002 until 2006, overseeing the vicar for clergy and communications offices.

Some local Catholics have been pushing for a new bishop who will take the diocese in a different direction than Loverde. The 76-year-old bishop is a traditionalist who decried the Supreme Court’s decision on same-sex marriage and now will serve as the diocese’s “apostolic administrator.”

Burbridge was critical of North Carolina’s HB2 “bathroom” law, which was seen as anti-LGBT, though he was also against an anti-discrimination ordinance in Charlotte that HB2 was intended to undo.

At a news conference before the mass today, Burbridge said he has “profound respect and admiration” for Loverde.

“He is a treasured friend and be assured that you will always see the unity that is ours as brothers,” Burbridge said.