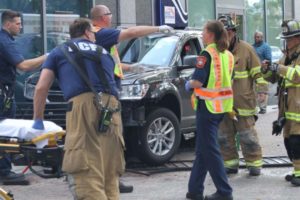 A Clarendon bar is raising money for one of its employees who suffered serious injuries after an SUV driver ran over her earlier this month.

Mad Rose Tavern (3100 Clarendon Boulevard) started a fundraising website on GoFundMe after the motorist struck Victoria Alicia Gonzalez while she was working in the restaurant’s front patio on Oct. 4.

Gonzalez, the mother of a 2-year-old baby, suffered multiple broken bones and internal injuries in the crash, which left her pinned under the SUV until firefighters freed her.

Arlington resident Shahed Quayum, 49, was charged DUI maiming in the collision. The crime is a Class 6 felony in Virginia, punishable by 1-5 years in prison and revocation of one’s driver’s license.

“Her husband, family, and friends have done an amazing job of pulling together in their grief to care for the baby,” the fundraising website says. “Now we, her Mad Rose family, will rally around them.”

As of this afternoon the fundraiser has collected $280 in donations, with a goal of raising $25,000.

The bar also is planning to hold a buffet dinner Thursday, Oct. 27, with all proceeds going to Gonzalez‘s family. The fundraiser is from 5 to 9 p.m.

Gonzalez is still recovering from her injuries, which were considered serious but, amazingly, not life threatening. Her family is facing mounting medical bills while she recovers.