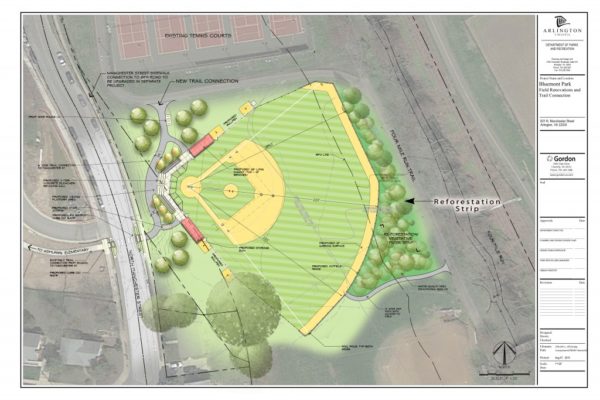 The following letter to the editor was submitted by John Foti on behalf of Arlington’s youth baseball community. Via letters and outreach at meetings, baseball advocates are pushing back against vocal opposition, among a group of residents, to the renovation of a baseball diamond in Bluemont Park.

A small minority of opponents have dominated the conversation about the planned improvements to the baseball diamond at Bluemont Park. I’d like to speak up for the proponents.

Participation in youth baseball has grown rapidly as the county’s school-age population has grown. There are currently over 3,600 youth baseball participants playing each year, up from about 2,400 participants just 7 years ago. Bluemont field #3 is one of the most heavily-used fields for kids aged 8- to 12-years old.

Bluemont #3 is a field used by more than 1,000 kids for more than 70 games a season and roughly 60 practices per week. Unfortunately, overuse and misuse of the field for non-baseball activities (such as riding bicycles around the diamond) have combined to make it very susceptible to unplayable field conditions. This spring alone, an estimated 60 percent of the scheduled activities on Bluemont #3 were cancelled due to unplayable field conditions – which is significantly higher than any other baseball field in the County

To derail the planned improvements, project opponents have made several assertions that are wrong or misguided.

Opponents are particularly opposed to fencing the field. Fencing helps mark in-play territory, keeps balls from flying out and hitting park users, and extends the life of taxpayer investments. Because the field is not currently fenced, park users routinely wander onto the field of play and interrupt permitted users. This is incredibly unsafe and unfortunate for the kids that are playing. Moreover, fields that have fences elsewhere in the county tend to remain in relatively good shape: They require only routine maintenance during the season and generally last years beyond their expected “useful life”.

The planned renovation of the Bluemont field will restore this much needed field to a condition of playability and safety, while helping to ease diamond field supply/demand issues for families across the County.

There are a few thousand good reasons to restore Bluemont #3, most of them are between ages 8-12 and want a good, safe place to play ball.