Recently there has been more attention paid to how incidents of sexual assault are handled on college campuses. The team behind actNOW wants to help the victims of those campus assaults easily get access to the resources they need to deal with the frightening, overwhelming issue.

Co-founder Mark Harris says actNOW is a “survivor-centered model to help after an assault has occurred.” Many sexual assault victims are “unfamiliar with how to [report the incident]. There’s a lot of information on websites, but it’s not streamlined,” Harris says. That realization prompted him to look for a way to gather all the information into one place and make it available on a convenient mobile platform.

The web- and app-based service will allow victims of sexual assault to report the incident — either anonymously or with identifying information — to the authorities of their choice. The user enters information about the incident and can choose to inform the university, the campus Title IX office and/or the police.

Users who enter information and then don’t feel like they want to send it can also choose to store the information until they are ready to pass it on to officials. “After an event that is really traumatic, a person may want to wait to come forward,” explains co-founder and certified sexual assault nurse Stacy Garrity.

According to co-founder Lee Reynolds, the actNOW team wanted to “deliver something that’s u

seful and impactful” to allow victims to “tell their stories and… know it’s not the end of the road.”

The team members add that this is not a platform for people to put their stories out to the public or media, but rather for victims to report incidents to authorities. But it isn’t only intended to be a reporting platform; the app also will link victims to physical and psychological healthcare providers.

The service makes it less intimidating to report incidents and takes the guesswork out of trying to discover or remember available resources, the co-founders say. Harris stresses that “actNOW is a liaison to the services. We do not provide the actual psychological or physical health services.”

The service started as Harris’ academic project at Georgetown University, and he found Garrity through researching sexual assault resources. Along with Harris’ longtime friend Reynolds, the three officially launched actNOW in March. The Arlington-based business now has six employees.

Much time has been dedicated to researching and initiating appropriate app security measures for both sexual assault victims and the universities where assaults occur. “We have to be mindful of each university’s rules for investigations,” Harris says. In addition, actNOW employees want to make sure strong security measures are in place to ensure the utmost protection for victims’ identifying information and HIPAA privacy. 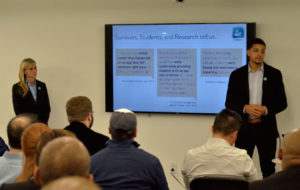 Currently, actNOW has an app prototype and employees are getting feedback on it from sexual assault victims; so far, the response has been positive. The employees are actively seeking funding and participated in a pitch competition a couple weeks ago. They’re working toward formal app development, which they hope to begin with a tech firm in the next few weeks. If all goes well, they’d like to send the finished app to universities in April 2017 during Sexual Assault Awareness Month.

The goal is to spend the next three years or so maturing actNOW through activities such as receiving focus group feedback and adding additional features to the service. Eventually, employees would like to explore the possibility of expanding the service to the military.

As far as measuring success with the tool, the actNOW team says that’s achieved when people actually use the tool to get help. “It’s really hard for people to report sexual assault,” Garrity says. “So when we start to see usage of the product, I think we’ll see success.”

The team hopes their passion for developing empowerment through technology will help victims both in the short term and down the road, while simultaneously raising awareness about sexual assault.

“We want to put control back in our users’ hands,” Harris says.