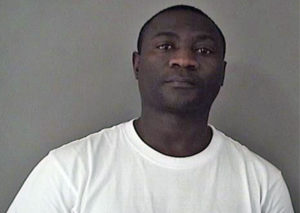 Arlington County Police are looking for additional victims of a man they say is a repeat fraudster.

Willbrod Frank Lukamilwa, 42, is accused of using a friend’s credit cards after stealing them from her home near Columbia Pike.

He has also falsely represented himself as a medical professional to defraud victims hoping to obtain employment, police say.

The Arlington County Police Department’s Financial Crimes Unit is investigating a suspect charged in a fraud case and are seeking additional victims. Willbrod Frank Lukamilwa aka Frank Wilbert Ramaphosa, 42, of an unknown address, has been arrested and charged with unlawful entry, credit card larceny, and credit card fraud.

At approximately 4:30 p.m. on November 28, officers responded to the 2500 block of S. 9th Road for the report of a burglary in progress. Through the course of the investigation, officers determined that the suspect, Willbrod Frank Lukamilwa, had unlawfully entered the female victim’s apartment while she was away. He had befriended the victim several weeks prior. The suspect was found to be in possession of and had completed transactions with the victim’s credit cards.

In June 2016, Lukamilwa was arrested by Montgomery County Police for committing a theft scheme in Maryland. In 2012, Lukamilwa met the victim in that case and fraudulently represented himself as “Head of Nursing” at a local hospital. Lukamilwa told the victim that he could help him enter a nursing program. Over three years, Lukamilwa accepted $13,500 in “tuition” from the victim at various locations in Montgomery County. Once Lukamilwa received the money, he stopped communicating with the victim.

The suspect has a history of fraud schemes and detectives believe there may be additional victims. The suspect is known to befriend men and women under the reuse that he is a doctor or is associated in the medical field. He may make promises of obtaining employment for the victims in exchange for a monetary fee. No employment is ever secured. Lukamilwa may also defraud individuals by gaining their trust and then beginning to borrow large sums of money, without the intent to repay.

Anyone with information related to this investigation is asked to call Detective P. Marseilles at 703.228.4237 or [email protected] To report information anonymously, contact the Arlington County Crime Solvers at 866.411.TIPS (8477).