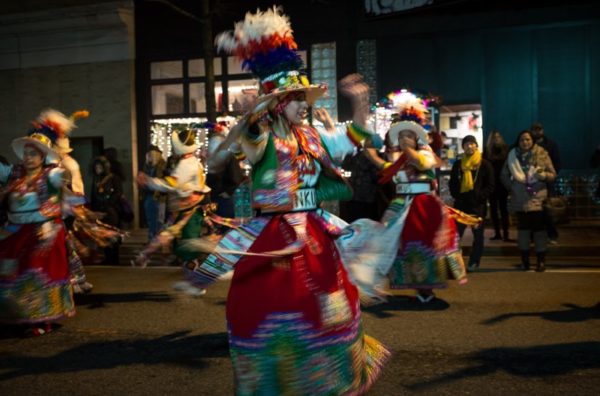 Though Mardi Gras is still more than a month away, Clarendon is already gearing up for its yearly festivities.

The 18th Annual Clarendon-Courthouse Mardi Gras Parade is slated to kick off on Fat Tuesday, Feb. 28, at 7 p.m. on Wilson Boulevard, organizers have announced. During the parade, revelers will make their way from N. Barton Street to N. Irving Street.

Previous years have brought masked characters, dogs in costumes, marching bands and other performers to the neighborhood.

After the parade, partiers looking for more fun can head to the second-ever Clarendon Mardi Gras Ball at the Clarendon Ballroom (3185 Wilson Blvd.) The party is scheduled to run from 7 to 11 p.m.

“There will be plenty of music, great food in the Fat Tuesday tradition, and beer, wine and punch,” an organizer wrote of the Mardi Gras party. Tickets for the ball are scheduled to go on sale soon.

The parade isn’t the only way Arlington residents and businesses are getting ready for the holiday. Bayou Bakery in Courthouse is currently taking orders for frosted king cakes.

One king cake costs $39.95, and a limited number of king cakes will be sold in stores each day. Customers can also order the cakes and pick them up 48 hours later.