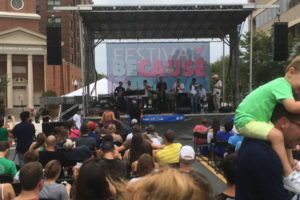 (Updated at 3:59 p.m.) A new festival could bring music, food and thousands of people to Courthouse this spring.

If all goes according to plan, “Festival BeCause” would bring around 40 bands and other performers to the Courthouse Square area (1425 N Courthouse Road) on May 26-29. The event would include four music stages, a beer and wine pavilion, food trucks, interactive community art walls and a “future tech exhibit,” according to its website.

The purpose of the festival is to raise awareness and money for good causes, said Festival BeCause co-organizer Anders Thueson. A large portion of the square would be dedicated to a “Village of Causes,” an area where attendees can learn about local charities and other nonprofits. 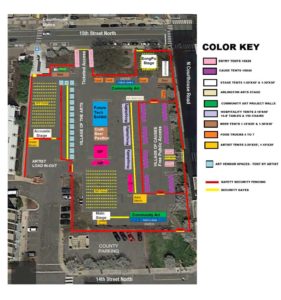 “People are going to come out to see their favorite band, but ultimately, they’re going to learn about the causes,” Thueson said. “Something’s going to strike them that day, whether it’s a veteran’s cause or a puppy rescue cause.”

If such a large undertaking sounds expensive, that’s because it is. Thueson estimates that, after booking bands and securing the space, the festival could end up costing as much as $250,000. So far, organizers have secured a pledge of $150,000 from a generous local underwriter, he said.

“If we’re able to do this event and walk away giving some money to causes and artists and have very little left over to do it again, we would consider this a success,” Thueson said.

Many of the festival’s details will be finalized in the coming days and weeks. Those interested in keeping up with the event can register to get email updates on the Festival BeCause website.

Images courtesy of Festival BeCause