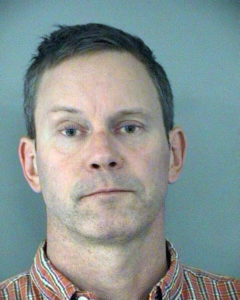 David Black, who was convicted in November of murdering his estranged wife in her home near Pentagon City, will serve two consecutive life sentences in prison.

The sentence, which was recommended by the jury, was confirmed by an Arlington Circuit Court judge Wednesday afternoon.

Black lived just blocks away from his wife, Bonnie Delgado Black, in the Arlington Ridge neighborhood. Prosecutors say he broke into her home on April 17, 2015 and stabbed her to death.

The murder scene was discovered after neighbors found Black’s two young children wandering around outside the home that morning.

David Black, 45, of Arlington, VA was sentenced on Wednesday, February 8, 2017 in the Arlington County Circuit Court to two consecutive life terms in prison for the 2015 murder of Bonnie Black.

On April 17, 2015, officers were dispatched to the 1100 block of 18th Street S. after two concerned citizens located the Black children alone outside their residence and called police for assistance. Arriving officers located Bonnie Black deceased from an apparent stabbing inside the residence. Detectives began an intensive investigation revealing that Bonnie Black was the victim of domestic violence.

David Black, the estranged husband of Bonnie Black, was taken into custody in October 2015 pursuant to an indictment issued by a special investigative grand jury. The indictment and subsequent bench warrant charged him with one count of first degree murder and one count of burglary while armed with the intent to commit a felony. On November 8, 2016, a jury returned a unanimous verdict finding David Black guilty on both counts.

Arlington County Commonwealth’s Attorney Theophani K. Stamos said, “The imposition of two life sentences for the murder of Bonnie Black speaks volumes about our community’s views when it comes to domestic violence.  We’re grateful to Judge Newman and the jury for their hard work, deep consideration and attention throughout a very difficult trial.”

Arlington County Deputy Chief Daniel J. Murray, Commander of the Criminal Investigations Division said, “This horrific murder personalized the investigation for the entire Criminal Investigations Section, many of whom had children themselves. They worked relentlessly for the cause of justice. The complex investigation, prosecution and ultimate conviction were possible because of a strong partnership between the Homicide/Robbery Unit and the Arlington County Commonwealth’s Attorney’s Office. Unfortunately nothing can bring Bonnie Black back to her loving family colleagues and friends but it is our fervent hope that we have been able to provide them with some closure.”