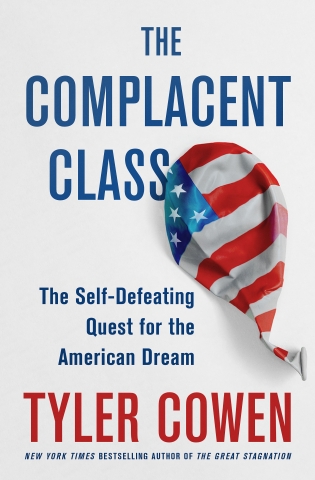 In 1835, French diplomat Alexis de Tocqueville published Democracy in America, in which he wrote of a United States that was perpetually in motion — full of restlessness, energy, and ambition.

Now, over 180 years later, America’s national character seems to be changing. Americans across income classes are moving less, starting fewer businesses, marrying people more like themselves, and basing choices on algorithms that wall them off from anything new or different.

In other words, Americans have become complacent. They are working harder than ever to postpone or avoid change. A focus on safety and caution over everything else has resulted in an America that is less dynamic and more conformist than ever before.

That’s the primary observation George Mason economist Tyler Cowen makes in his new book, The Complacent Class: The Self-Defeating Quest for the American Dream. In it he documents the rising trends of self-segregation, stagnation, and risk avoidance in America. Of the book, author Malcolm Gladwell said, “His brilliant new book…has been on my nightstand after I devoured it in one sitting. I am at round-the-clock Cowen saturation right now.” At Foreign Affairs, Edward Luce said, “Cowen does a marvelous job of turning his Tocquevillian eye to today’s America.”

On Monday, March 6, from 6-7 p.m., the Mercatus Center at George Mason University will host a live interview at George Mason’s Arlington Campus (3351 Fairfax Drive) between Reason Magazine’s Katherine Mangu-Ward and Tyler Cowen on American complacency and what it means for the future of politics, the economy, and the very foundation of our culture.

The event is free of charge and open to the public, and copies of the book will be available for purchase after the discussion.

The discussion is especially timely given the current state of politics. In his book, Tyler Cowen notes that the short-term peace and calm that results from American complacency simply cannot last. He predicts a chaotic future as more Americans rebel against the economic stagnation and lack of mobility that result from maintaining the status quo.

While America may currently seem less stable and more restless than before, The Complacent Class suggests there is reason for long-term optimism as the upcoming process of social, economic, and legal transformation could ultimately reinvigorate Americans to bring back the dynamism, energy and ambition that Tocqueville observed in his time. Nevertheless, many Americans may soon wish to have the era of complacency back.

Click here to pre-order a copy of The Complacent Class:The Self-Defeating Quest for the American Dream.

The preceding was written and sponsored by the Mercatus Center at George Mason University.