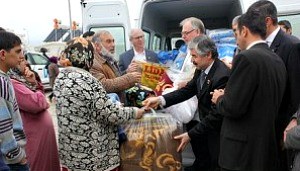 A rally Saturday will teach attendees how to advocate for the region’s growing refugee population.

It is organized by a group called NOVA Friends of Refugees.

The event will contain three components: speeches by refugee and religious leaders; panel discussions on how attendees can influence friends, family and elected officials on refugee issues; followed by a session of advocacy through postcard-writing and a refugee volunteering fair.

Earlier this year, Beyer and dozens of his congressional colleagues re-introduced the Freedom of Religion Act, in response to President Trump’s executive order barring refugees and citizens of seven Muslim-majority countries from entering the United States.

Previously, Arlington County has said it is ready and willing to help resettle Syrian refugees.