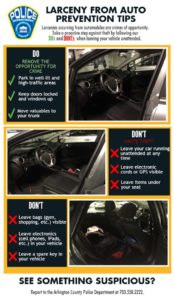 (Updated at 10 a.m.) Despite some recent arrests, more than 200 vehicles have been broken into so far this year in Arlington, and the criminals do not appear to be slowing down.

According to Arlington police, there were 209 “larceny from auto” reports taken from Jan. 1 to April 3. Most of those crimes were likely preventable, requiring only that the owner of the vehicle lock their doors.

“The majority of our thefts from vehicles are from unlocked cars,” said Arlington County Police Department spokeswoman Ashley Savage. “Our investigations and witness accounts reveal that in the majority of cases, suspect(s) are seen walking up a street and trying door handles. They enter a vehicle that opens and bypass a vehicle that does not.”

“Locking your vehicle’s doors and removing valuables increases the likelihood that the suspect(s) will move on,” Savage added.

The latest series of car break-ins was reported in Fairlington yesterday morning. Officers located eight vehicles that had been entered and rummaged through.

“At approximately 8:05 a.m., police responded to the 4700 block of 30th Street S. for the report of items thrown about the ground,” Savage said. “The initial investigation suggests that the vehicles were unlocked. The investigation is ongoing.”

In addition to the public service announcement flyer above, ACPD has also issued the following tips for residents.

1. No matter if you park on a public street, in a driveway or garage take all valuables out of your vehicle. This includes keys, key fobs, purses, cash, credit cards and electronics. Don’t forget the valet key that comes with some vehicles.

2. Lock your doors and pull on the door handle to verify it’s locked. If a thief can get into a vehicle, they can also have access to a garage door opener and can gain access to your home. Always ensure the door between your garage and home is locked.

3. Call police if you see people looking into vehicles. The telltale sign that this has occurred in your neighborhood are open doors with the interior dome lights on. If you don’t see the perpetrator(s) but suspect some vehicles have been entered, call the non-emergency number at 703-558-2222. If you see a suspect in your vehicle, DO NOT APPROACH THEM and call 911 immediately.