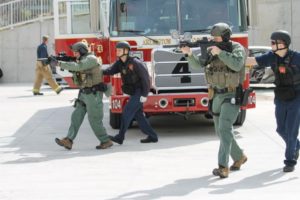 A “full-scale” exercise to simulate the response to a terrorist attack in the National Capital Region is set for tomorrow, with Arlington one of six sites where the action will be taking place.

Residents can expect to see an increase in public safety vehicles and law enforcement officers in the area, and those traveling nearby may hear noise originating from the training site. All activities will be confined to the training site.

Law enforcement officials and other first-responders will take part in the exercise organized by the Metropolitan Washington Council of Governments. The exercise is intended to prepare for a “complex” attack involving multiple target locations and teams of perpetrators.

Arlington is one of six locations for the exercise, along with neighborhoods in Northeast and Southeast D.C., and Prince George’s and Fairfax counties.

MWCOG spokeswoman Jeanne Saddler said the exercise is designed to be as realistic as possible. She said that residents nearby will be notified beforehand and that disruption should be minimal for those in the area.

“To some degree they’re trying to make it a surprise for the participants,” she said. “In order to maintain the exercise for participants and first-responders, we have to avoid making a mention of locations… I don’t think there’ll be disruption for residents or people traveling.”

Hundreds of police, fire, and emergency medical service personnel and volunteer actors will be involved in the exercise. The timing of the exercise is a secret too.

“Law enforcement officials practice and exercise their skills on their own regularly because that’s the best way to ensure we are always ready to respond quickly and professionally,” said Scott Boggs, managing director of Homeland Security and Public Safety at MWCOG, in a statement. “On April 26, we’ll go one step further and stage a very realistic emergency event involving multiple sites and actors posing as the casualties. However, there is no reason for residents to be alarmed because the exercise will occur in a controlled environment.”