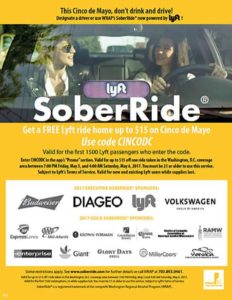 Revelers enjoying Arlington’s Cinco De Mayo celebrations this weekend will be able to take a free ride home as part of a regional effort to combat drink driving.

During that time, area residents aged 21 and older celebrating with alcohol can download Lyft to their phones, then enter the code CINCODC in the app’s “Promo” section to receive a ride worth up to $15. The code is valid for the first 1,500 Lyft users who enter it.

The program, known as SoberRide, made the switch in March from using local taxicabs to Lyft, a competitor of market leader Uber.

“In 2015 and according to the National Highway Traffic Safety Administration, nearly a third of all U.S. traffic fatalities during Cinco de Mayo involved drunk drivers,” said WRAP president Kurt Erickson in a statement. “Worse, 51-percent of male drivers ages 21-to-34 killed in U.S. Cinco de Mayo crashes over the last half-decade were drunk.” 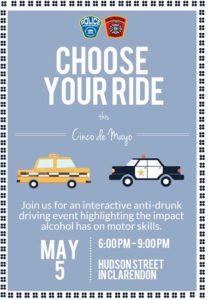 WRAP said that 225 people participated in its Cinco de Mayo SoberRide program. The charity also offers SoberRide on St. Patrick’s Day, Independence Day, Halloween and from December 15 through and including New Year’s Eve.

That same day, the Arlington County Police and Fire Departments will host a joint interactive event to highlight the dangers of drink driving. The event will take place at the intersection of N. Hudson Street and Wilson Blvd in Clarendon beginning at 6 p.m. and is free.

Police will close N. Hudson Street from Wilson Blvd to 1200 N. Herndon Street in front of The Clarendon apartment building from 5 p.m. Friday to 3 a.m. Saturday to accommodate the event. Temporary “No Parking” signs will be in the area, and illegally parked cars may be ticketed or towed.