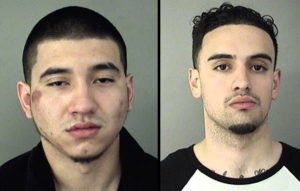 Two drunk men in their early 20s went on a vandalism spree Saturday morning, with a shotgun as their weapon of choice, according to Arlington County Police.

The shootings happened around 2:20 a.m. Saturday, on the 2800 block of Key Blvd in Lyon Village, police say.

“The suspects advised that they were intoxicated and wanted to remain in the area until sober,” ACPD spokeswoman Ashley Savage told ARLnow.com. “That’s when they retrieved the shotgun, walked through the neighborhood and discharged multiple rounds.”

Two men, from Springfield and Falls Church, were arrested with the help of a description provided by a witness. They are now facing numerous charges including discharge of a firearm in a public place and destruction of property.

DESTRUCTION OF PROPERTY (Significant), 2017-05060047, 2800 block of Key Boulevard. At approximately 2:19 a.m. on May 6, police were dispatched for the report of two suspects walking in the area damaging vehicles. Arriving officers located individuals matching the descriptions provided by a witness. The investigation revealed that the two intoxicated suspects retrieved a shotgun from their vehicle, discharged multiple rounds and damaged several vehicles. Alex Ventura, 21, of Springfield, VA was arrested and charged with destruction of property (x4), drunk in public and reckless handling of a firearm. Gerson Arias, 22, of Falls Church, VA was arrested and charged with intentionally destroy property, discharge a firearm in a public place, possession of a controlled substance, and drunk in public.