A mobile app that allows customers to have their dry cleaning and laundry picked up, done and returned expanded its service into Arlington last month.

Cleanly, a Manhattan-based startup, now serves the Rosslyn-Ballston corridor, including Clarendon and Courthouse. Since launching in 2015, it has cleaned more than 2.5 million pounds of laundry.

Company co-founder and CEO Tom Harari said Arlington is the perfect market for its service: full of professionals who commute to and from work each day who do not necessarily have time to do laundry. 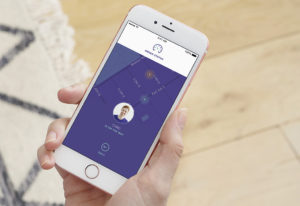 Users are able to schedule pick-ups online and via the app in a few clicks, and can provide customized cleaning and laundering instructions to Cleanly’s vendors in minutes. Users can also use the app to a photo highlighting stains on clothes for attaching to the order.

Cleanly’s RUSH feature allows customers to designate their pick-up and delivery time to the hour and receive their clothes back the same day, while tracking their delivery on the app’s map using GPS.

Harari said the app was born to help those either too busy to do laundry, without facilities nearby or unable to drop their clothes off with a cleaning company.

“With so many of these services going towards app-based in the tech world, it seemed logical to me that this would become an industry that would be overturned by technology and made simpler,” Harari said. “It just wasn’t, there was nobody doing this at the time and it kept sitting on my head. I kept asking myself, ‘Why doesn’t someone do this?’ And finally I just said, why don’t I try this?” 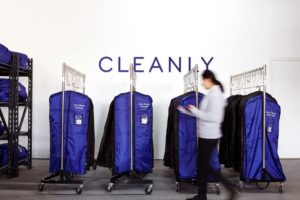 And the technology in the app, like letting customers photograph stains to be removed, is to help what can be an arduous task simpler and try to remove any issues that might crop up.

“We start with the basic understanding that laundry is just not a fun thing,” Harari said. “People don’t like to do laundry, and if we can take that one task off of people’s task list or chore list of the week, then we’ve accomplished what we need to accomplish. So we’ve always tried to think of, how can we delight customers? It’s our No. 1 core value.”

Cleanly makes use of local wholesale cleaners in the region to carry out orders for customers, something he said is similar to dry cleaners, which generally do not do their own cleaning any more. 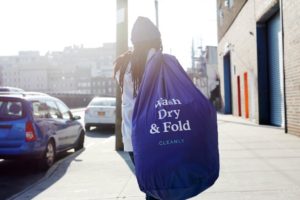 So far, Harari said business has been brisk, on the back of an advertising campaign on the Metro system, direct mail and social media.

“It’s been about two or three weeks already that we’ve been in Arlington and so far, so good,” Harari said. “We’ve already built up a sizable waitlist, so people from Arlington have already heard of Cleanly and are signing up…This is how we wanted it to work, so that by the time we were ready logistically and operationally to open up, we had a pool of users who were already interested in the service and could turn it on and get what they want.”