Does the County Board’s latest action leave Arlington with too much total debt?

Whereas this is certainly one legitimate way to evaluate Arlington’s status, there are other legitimate ways — some of which raise cause for concern. A more extensive county government explanation of our current and projected future debt levels, followed by a full public discussion, is in order.

Arlington can maintain its current credit rating — despite having roughly $1 billion in total debt (including revenue bonds and other debts) compared to roughly $1.2 billion in total annual revenue (83 percent leverage) — because the bond/credit rating agencies have confidence in Arlington’s ability to continue raising property taxes to generate sufficient revenue to service (repay) its mounting debt load.

An authoritative municipal finance source  lists 10 financial ratios (e.g., per capita debt, total debt to fair market value, and total debt to average individual personal income) that should be analyzed and discussed publicly in determining the relative risks of a municipality’s debt load.

In a 2014 opinion column, the Sun-Gazette examined Arlington’s debt level in terms of these ratios, concluding:

Think the Arlington government’s debt has gone up significantly over the past decade? You have a 75-percent chance of being right. There are (at least) four ways to measure the county government’s bonded debt. Three of them show a significant increase, while the fourth shows almost no jump at all.

A 2014 study in The Connection Newspapers concluded that “Arlington County has one of the highest per capita debt loads in Northern Virginia”: 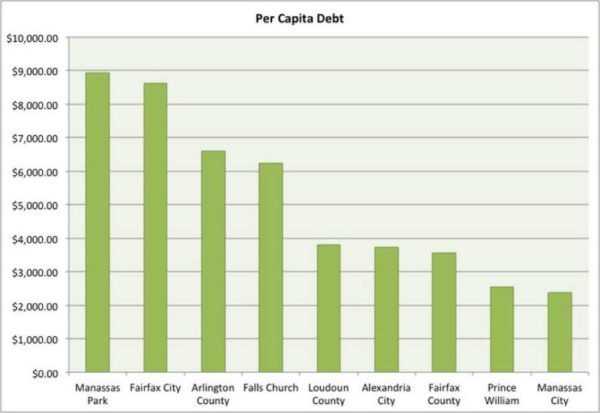 Further, assessing debt capacity on an ongoing basis is essential for effective debt management and ensuring that debt-planning activities are integrated into the capital improvement process. This assessment, in short, ensures that “an appropriate balance is struck between a jurisdiction’s capital needs and its ability to pay for them.”

By continuing to focus on maintaining our AAA/AAA credit rating as the determinant for deciding whether to incur more debt, we are making a mistake. Attaching too much weight to this factor ignores other county debt. It also assumes that borrowing the maximum amount allowed by the ratings agencies is wise, and that Arlington’s tax base has a virtually unlimited capacity to absorb ongoing tax-rate and assessment increases without suffering ill effects.