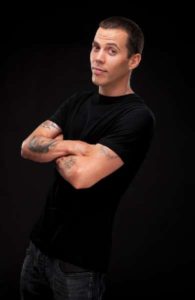 Summer may have just kicked off, but the Arlington Cinema Drafthouse (2903 Columbia Pike) is already planning for a big autumn of marquee performances.

It’s expected to start Sept. 7-9 with comedy legend Jon Lovitz. Later that month, Pauly Shore will be performing a “one-nighter” on Sept. 24. Another former MTV personality, “Jackass” star Steve-O, will be in town Oct. 19-22. And comic/actor Tom Arnold will perform his standup act on Nov. 3 and 4.

In addition to the comedy, actor Val Kilmer will be at the Drafthouse on Oct. 6 and 7 for a special screening of his one-man play about Mark Twain, plus a question-and-answer session after the film.

The Drafthouse is in the midst of a series of changes, including new seating, a new summer focus on first-run films, and a new Mexican restaurant in the former “green room” bar space.