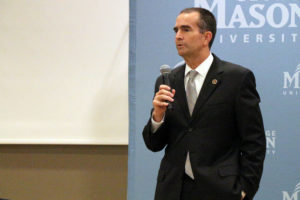 A record number of votes were cast Tuesday in Arlington in the Democratic gubernatorial primary, according to the Arlington County Democratic Committee.

Lt. Gov. Ralph Northam defeated Tom Perriello 56-44 statewide and 62-38 in Arlington. According to the committee, a record 28,167 votes were cast in Arlington.

In a press release, excerpted below, ACDC said the turnout record “is proof that Democrats across Virginia — and especially in Arlington — will vote for progressive, Democratic candidates in November.”

Arlingtonians came out again in record numbers to participate in the Democratic primary this year: 28,167 votes strong is the highest gubernatorial primary turnout in Arlington’s history, and 25,717 votes strong is historically high turnout for the lieutenant gubernatorial primary. The surge of enthusiasm in our party is proof that Democrats across Virginia — and especially in Arlington — will vote for progressive, Democratic candidates in November.

Four years ago in the Commonwealth, women’s reproductive rights, the right to marriage equality, and progress on renewable energy were all at risk. But in the four years since we regained the Governor’s mansion, our Governor has stood up for Planned Parenthood, supported marriage equality, expanded access to voter registration and absentee voting, and strengthened protection for victims of domestic violence. The ACDC is committed to building upon these achievements by electing a Democratic ticket and helping elect more Democrats to the House of Delegates.